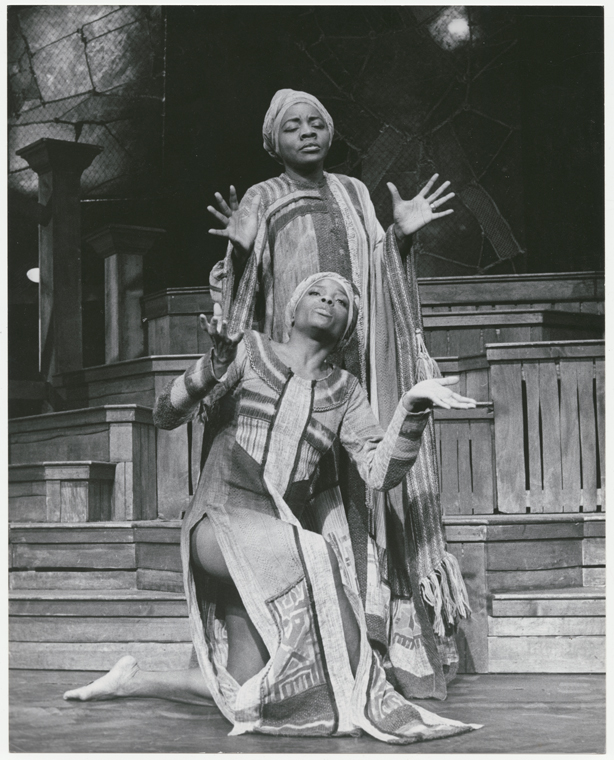 Your Arms Too Short To Box

Based on the Book of Matthew, this soaring celebration in song and dance tells the story of Jesus, his apostles, and the women who inspired, followed and consoled him. From parables to miracles, from crucifixion to resurrection, it’s a tale of love, betrayal and redemption, told through rousing gospel music.

James Weldon Johnson used the phrase “Your arms too short to box with God” in his novel The Autobiography of an Ex-Colored Man, and in the poem “The Prodigal Son.”

Director and writer Vinnette Carroll developed the musical from the Gospel of St. Matthew. Carroll directed over 50 productions during her 10 years with the Urban Arts Corps (UAC), including the much celebrated Don’t Bother Me I, I Can’t Cope, and the short-lived But Never Jam Today. Carroll has been credited with infusing Broadway musicals of the 1960s and 70s with a unique African American aesthetic.

The musical was further developed and was performed in Washington, Chicago, and Philadelphia.

Your Arms Too Short to Box With God transferred to Broadway, opening at the Lyceum Theatre on December 22, 1976.

ABC Records released an original cast album on vinyl in 1977.

In November 1977, the production transferred to the Eugene O’Neill Theatre where it played until January 1, 1978.

Your Arms Too Short to Box With God embarked on a national tour, traveling to 66 cities around the United States.

The musical re-opened on Broadway in 1980 with several cast members from the original production. It first played at the Ambassador Theatre before transferring to the Belasco Theatre. Jennifer-Yvette Holliday received rave reviews for her performance, and she was nominated for a Drama Desk Award for Outstanding Featured Actress in Musical. The second run on Broadway played for 149 performances.

The production continued to tour, and was re-worked when Patti LaBelle joined the cast. The musical returned to Broadway for a second time, opening at the Alvin Theatre (now the Neil Simon) in the fall of 1982. Patti LaBelle made her Broadway debut, along with another popular singer, Al Green. Green was nominated for a Tony Award for Best Actor in a Musical for his performance. The third outing on Broadway ran for 69 performances.

Album “Your Arms Too Short To Box With God” was nominated or Best Inspirational Performance. GRAMMY Awards (1977)

Delores Hall won the 1977 Tony Award for Best Featured Actress in a Musical.

Vinnette Carroll earned Tony nominations for Best Book of a Musical and Best Direction of a Musical.